So, as you may or may not know, I currently work as an organic chemist in the field of carbon capture and storage (CCS). It has come to my attention that not many of you actually know what CCS is so I thought I would take this opportunity, in my jet lagged state, to explain it. There are plenty of other people who have explained it much better than me so do also check out the literature.1, 2

“Carbon capture” refers to the capturing of carbon dioxide (CO2), usually from power station flue gases and “storage” is the storing of this captured CO2. So why do we want or need to capture and store carbon dioxide from places such as power stations? Fossil fuel combustion supplies more than 85% of energy for industrial activities and is therefore a huge greenhouse gas contributor. Coal will supply 28% of global energy by 2030, as part of a 57% increase in CO2 emissions. CCS is a way of reducing emissions and is considered a provisional system to allow a transition away from the use of fossil fuels [“World energy outlook” (International Energy Agency, Paris, 2007), http://www.iea.org]. 2

There are many different methods for the capture of CO2. My research is in post-combustion carbon capture (PCCS) which, as the name suggests, allows the capture of CO2 after the combustion of the coal (or gas). There are also pre-combustion and oxy-fuel combustion processes which can be used (as shown in my very crude and simplified schemes below).3

Since it is what I research, I will only talk about PCCS, but the other CCS options are equally valid. The majority of PCCS research is in the use of amines to capture CO2, as these can form stable carbamates or bicarbonates with CO2. These salts can then be heated up to allow release of pure CO2, which can be sent off for storage, and the free amine, which is recycled.

There are currently lots of pilot plant projects where amines are being used to capture carbon dioxide. Hopefully soon there will be a full-scale demonstration project, and then fingers crossed, it will be commercialised.

Storage (or sequestration) is very much a geologist’s problem and although I know more than the average person about it, I am in no way an expert. The theory is that the captured, pure CO2 can be stored in underground geological formations such as oil fields, gas fields and saline aquifers. The current trend is to use CO2 in enhanced oil recovery which allows previously unavailable oil to be retrieved. Similarly, CO2 can be used to obtain coal from unmineable coal seams. Saline aquifers, of which there are many, offer a large potential storage volume but relatively little is known about the effects of storing CO2 in them, particularly in relation to potential CO2 leakage. There is a great deal of research into all areas of storage and I do recommend looking at further literature if you wish to learn more.

I hope I have managed to inform you further on CCS. Although it is not a fix-all process, I believe CCS is necessary as a short term measure to reduce our carbon emissions and I hope a full-scale CCS project does go ahead very soon.

As you may know, I have recently helped to organise an open day demonstration at my University and I thought I would take this opportunity to show you what the end result was.

Carbon dioxide comprises of two oxygen atoms bound to a carbon atom. It is colourless, odorless, non-flammable, and slightly acidic. For most of these experiments I used solid carbon dioxide or dry ice. Carbon dioxide only exists as a solid and gas at atmospheric pressure and therefore sublimes between the two states. Dry ice sublimates at −78.5 °C (−109.3 °F) at atmospheric pressure and this extreme cold makes the solid dangerous to handle without protection due to burns caused by freezing. I don’t recommend playing with with dry ice. Please do not repeat any of these experiments at home. These were carried out by trained professionals wearing the correct PPE.

Carbon dioxide is acidic in solution. When it is dissolved in water it forms a weak acid called carbonic acid. To prove this, solid carbon dioxide (dry ice/cardice) was added to a solution of amine, in this case monoethanolamine, containing universal indicator. Universal indicator is purple/blue for alkalis and is red/orange for acids. You can clearly see that, on addition of the dry ice, we get a colour change from purple to blue to green to yellow to orange. Pretty cool huh?

As you may know, the density of carbon dioxide is around 1.98 kg/m3 which is about 1.5 times that of air. To demonstrate this, we blew up a balloon (you can fill it with nitrogen also) and placed this on a layer of dry ice, which was subliming to give us CO2 gas. The balloon rested nicely on the layer of CO2 glass and gave us the illusion of a levitating balloon. We also showed this by blowing bubbles onto the CO2 but I forgot to take photos of that. The bubbles bob up and down on the layer of CO2 gas. It is pretty neat and well worth seeing for yourselves.

Some people asked the question, “but don’t we see balloons floating all the time when they are filled with helium?”…this of course is the opposite phenomenon, where helium is less dense than air.

Expansion of carbon dioxide from solid to gas

Dry ice and liquid carbon dioxide (which can be formed under pressure) expand they becomes a gas. Simply put, 44g (1 mole) of liquid CO2 will give approx. 22.4 litres of gaseous CO2. We demonstrated this expansion by filling a nitrile glove with dry ice and heating this up with water. We tied up the glove with a cable tie and watched it expand…behind a blast shield, just in case.

The glove got around 5-6 times this size. This experiment was very much a crowd pleaser and I am pleased to say that the glove didn’t once explode.

Carbon dioxide as a fire extinguisher

For this experiment you can use dry ice but you can also use carbonated drinks such as Coke or lemonade. As you can see, you put a CO2 source in a conical flask and seal it. You then attach a tube which allows CO2 to escape and you point the end of this tube at the ‘fire’. In this case we used a tea light but we also demonstrated that six birthday candles could be blown out.

Carbon dioxide is a major greenhouse gas, responsible for substantial amount of global warming, currently ca. 380ppm. Post-combustion carbon capture removes CO2 from power station flue gas streams and can potentially be fitted to existing power stations. The process utilises amine solvents such as MEA, which reacts with CO2 to form a carbamate (shown below) or bicarbonate salt, and this holds it in an aqueous solution allowing other unreactive gases (N2, O2) to pass through. On heating to around120 ºC, the carboxylated amine regenerates the CO2 as a gas stream, and the amine solution is recycled.

In this experiment we added a solution of MEA to a pre-filled bottle of gaseous carbon dioxide. This creates a vacuum when the amine ‘captures’ the CO2 and crushes the bottle from the inside. This process is exothermic (gives out heat) and so the bottle gets very warm. Conversely, the release of CO2 is endothermic. 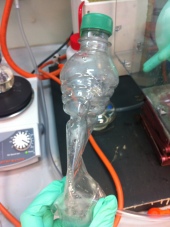 After CO2 capture to give carboxylated MEA, we then showed that CO2 release is possible. As previously mentioned this is usually carried out by simply heating the carboxylated amine solution. In this case, however, we used acid to release the amine and thus the CO2 gas. The carboxylated MEA was removed from the crushed bottle and poured in to a conical flask and acid added. The released CO2 was seen as bubbles which could also successfully blow up a balloon.

I hope you have enjoyed reading about my open day demonstration. Any ideas you have on future experiments to show off would be great and any comments on those shown above would be grand.