Nail polish/varnish has been worn (mostly) by women since 3000BC. Queen Cleopatra is said to have used natural ingredients such as mixed oil, Arabic gum, powder and henna to paint her nails red. It was said that the stronger shade of red the person wore, the more powerful the person. Similarly, the Chinese used a polish made from Arabic gum, gelatin, egg whites and beeswax. In the 19th century people began to massage tinted powders and creams into their nails and buff them shiny with, for example, Graf’s Hyglo nail polish paste. Cutex (from their product cuticle extract) produced the first nail modern nail polishes in 1917 with the introduction of their coloured nail glosses.

Many brands of nail polish are now water-based but the majority of nail polishes contain nitrocellulose dissolved in butyl acetate which is considered less environmentally friendly. Magnus Levy was the first person to prepare a synthetic material which formed a resin by condensation of formaldehyde and toluenesulfonamide in 1893.

The reason I am writing this blog post is because I am allergic to a lot of nail polishes and have to be very careful which ones I wear. More specifically, I get eczema (very itchy, painful, dry skin) around my eyelids and mouth. The doctors were pretty clueless about what was causing my unattractive eczema/dermatitis, but fortunately, my oh so smart twin sister, who was a medical student at the time, informed me that she had read an article saying that the nail hardening resins in nail polish can cause eczema, particularly around the eye.

There are a number of articles describing contact dermatitis as a result of nail polish use with at least 80 % of these cases being dermatitis of the face and every second case being dermatitis of the eyelid  (Contact Dermatitis 1995, 33, 157-164). There have been many reported cases of nail polish induced dermatitis but it is unclear exactly which ingredient in nail polish is actually to blame for my own dermatitis but toluenesulfonamideformaldehyde polymer resin is thought to be the main cuplrit (Contact Dermatitis 2007, 57, 277) with formaldehyde and nitrocellulose possibly also causing problems. There are many, many ingredients in nail polishes, such as pigments, thickeners and stabilisers, which may also cause issues. 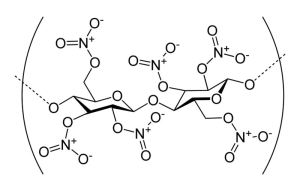 The MSDS for toluenesulfonamideformaldehyde resin says that skin and eye contact may cause skin irritation and it may be harmful by inhalation, ingestion, or skin absorption. There may also have traces of formaldehyde which is an irritant and sensitizer but it is usually only found in levels below 0.20% in nail polishes (Contact Dermatitis 1997, 37, 155-162). I frequently use formaldehyde in the lab and have never had a bad reaction to it so this is unlikely to be the source of my irritation, although I do wear gloves.

I have found that, as long as I stay away from nail polishes containing formaldehyde resins, which are usually in nail polishes that are designed to strengthen the nail, I am fine. The problem is that many nail polishes do not have a full list of ingredients in so I just err on the side of caution and do not buy any nail polish that advertises nail hardening. I hope one day that there is a cheap, pretty alternative to toluenesulfonamideformaldehyde resin based nail polishes so I can paint my nails itch and worry free!

27 thoughts on “My allergy – Nail Polish”